Help Maryland Save Lives and Save Money

Thank You to Governor O'Malley, Senator Benson, Delegate Frush, and to the many Senators and Delegates who voted to save lives and money in Maryland!

Thank you to the thousands of individuals, businesses, organizations, agencies, veterinarians, and coalition partners who stood together, strong and in unprecedented numbers, ensuring this lifesaving legislation passed.  Because you cared, because you were not silent about things that matter, thousands of lives of Maryland's homeless pets will be saved.  Each of you is a hero.

Link to Maryland Votes for Animals list of  "Superstars" of Maryland's Spay/Neuter Program
Thank You!

The original Save Maryland Pets webpage in support of the Maryland Spay/Neuter Program:

SAVING LIVES AND MONEY
Legislation has been introduced in the Maryland Legislature.
Legislators need to hear from you TODAY!

Please ACT NOW and send a letter to save lives by supporting the voluntary spay/neuter program in Maryland!

The Maryland Spay/Neuter Task Force report shows that the State of Maryland needs a state spay/neuter program to combat the serious and costly homeless pet problem and euthanasia rate in Maryland.

This is an avoidable tragedy for which there is a humane and fiscally responsible solution.

No other disease or condition of companion animals
takes as many lives as euthanasia.
(Janet M. Scarlett, DVM, Ph.D, Cornell University)

The successful strategy is
adequately-funded and
well-designed preventive programs.
(Peter Marsh, A Roadmap to Ending Animal Shelter Overpopulation in the US)

Spay/neuter programs are proven to be the best antidote to mass euthanasia.  They are the most humane and fiscally responsible way to address the shelter pet population problem.

Establishing a state spay/neuter program is the best way to reduce Maryland's euthanasia rate and the millions of dollars spent to destroy Maryland’s homeless pets. A Maryland program will save lives and money.

Thirty-four states have established funding mechanisms to support spay/neuter programs.
It is time for Maryland to join them and pass a state program now to reduce Maryland's intake and euthanasia rates.

It is time for Maryland to pass a voluntary spay/neuter program to reduce Maryland’s euthanasia rate and start saving lives and taxpayer money now!

Maryland lawmakers need to hear from you!
Please, ACT NOW and send a letter to save lives today.

The Maryland Spay/Neuter Task Force was created by the General Assembly and the Governor.  Members included representatives from animal control agencies, shelters, the pet industry, State and county agencies, rescues, animal welfare advocates, veterinarians, and the Maryland Senate and House of Delegates.

The Task Force found there is a shelter pet population problem in Maryland that places significant cost burdens on local governments, trauma on the staff of animal shelters, and presents an avoidable and unnecessary loss of animal life. The Task Force recommends increasing spay/neuter surgeries through a well-designed voluntary program to reduce intake and euthanasia rates of unwanted animals in Maryland animal shelters.  A spay/neuter program will save lives and money. 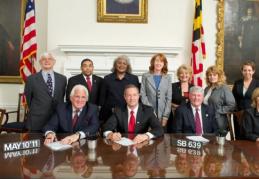